(this is not me saying it’s bad, love me some pulp trash)

(this is not me saying it’s bad, love me some pulp trash)

It might be closer than the usual WK book club fair to pulp, but afaik it doesn’t quite reach that level, haha. It’s no highbrow literature, but so far I’m not getting super generic isekai vibes from it, which would be my closest definition of pulp at this point in the Japanese reading journey. We need to find some real bodice rippers or something; I once saw a book series described as “beer and pretzels horror”, and that sounds just right for a potential pulp club.

We need a pulp trash club,

I would definitely participate

@Naphthalene ever wanted to head a book club?

Hmm while I do like to read pulp trash myself, there are too many ways that can go wrong. As @eefara said:

super generic isekai vibes […], which would be my closest definition of pulp at this point in the Japanese reading journey.

There’s more than that, but that’s definitely a big part of it. It’s not hard to imagine something like KonoSuba winning out of popularity alone.
I guess I could put a rule that fan service is NG, but overall I feel it’s not optimal for a book club

There’s more than that, but that’s definitely a big part of it.

I was mostly just generalizing for the sake of space more than anything; defining pulp gets oddly specific as far as I can tell.

Finished my own quick re-read of And Then There Were None.

I was mostly just generalizing for the sake of space more than anything; defining pulp gets oddly specific as far as I can tell.

Ah, by the way, I was not specifically replying to you, that was a literal quote for the sake of explaining what I meant by “many ways [such a club] can go wrong”

Re-reading my post, that was pretty unclear, so I tried to edit it a bit.
(My point was that, while I do like some pulp trash, there are too many things that would fit that descriptor and, statistically, something I would hate to read would get picked)

I’m very excited to dive in 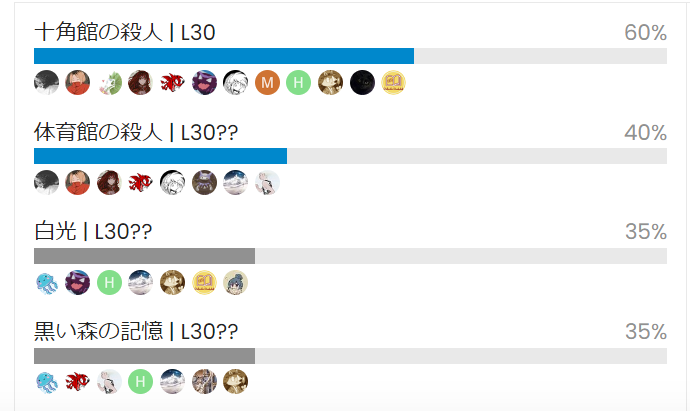 Just to reiterate the schedule of events (this is also in the main post):
Today (July 29th*): Voting opens on reading cadence the chosen book will be read at. This week also serves to give time for people order the book if they’re planning to read paper copies.
August 8: First week of book club!

I’m also removing the nominations テスカトリポカ and 大鞠家殺人事件 as they did not receive any votes.

*While I live in an North American timezone, I will try to open weekly threads in the evening the day before my time so that people waking up on the continents ahead of me timewise don’t have to feel impatient

I’m also removing the nominations テスカトリポカ and 大鞠家殺人事件 as they did not receive any votes.

The first murders have occurred.

Fewer than I thought there’d be, to be honest.

Just finished reading 【無料読本】探偵事務所「ノッキンオン・ロックドドア」へようこそ | L27??, a sampler for one of the nominated books. Highly recommended for those looking to read a short mystery (the sampler covers the first mystery in the book fully), those wanting to test their reading skills on a shorter work (the mystery spans about 32 pages), and those looking to decide if they’d be interested in the full book.

I finished ‘And then there were none’ today! Just in time.

It was both my first Agatha Christie and the first non Japanese mystery in a while for me.

I dream of the day those are my stats reading in Japanese.

I get emails from Kinokuniya and I saw this book being promoted but with an obi that said 映画決定！so I looked into it and it’s being made into a movie coming out in 2023, produced by Netflix so presumably should be available globally!? What drives me nuts is that I don’t see any info about who is acting in it and I want to know if any of my favorites will be there or not

Week 3 thread for 十角館の殺人 is open!

As a reminder, you can absolutely still participate in the earlier threads after the week ends if reading at a different pace than the club.

Book: 私が大好きな小説家を殺すまで | L25??
Is there an ebook available?: yes

Why are you nominating this book:
I saw this instagram post about it and it seemed interesting (sorry to anyone who doesn’t use instagram). I then bought a copy, read the first few pages and it seemed interesting enough, reasonably easy (probably not 25 but seems sub-30? Guessing off a few pages only) and it’s a light novel, which I know many people on the forums enjoy.

And a hopefully more accessible read for a lot of people, although, of course, I will read whatever is voted on provided I haven’t read it already and it doesn’t have graphic animal cruelty (I have my limits).

This time around I’m going to cap the nominations at 20 just to keep it from being overwhelming and also for the poll issue seanblue called out before. I won’t open voting up until ~October 10th but as the read of 十角館の殺人 is wrapping up I thought I’d get things rolling. As a reminder, nominations can be viewed here.

Looking at the list, there seem to be 18 nominations, but one of them is the book we’re currently reading, so three more free slots?

As per WK book club practice, I think it might be useful to also keep a list of removed nominations (people might still want to look them up and either re-nominate them or read them on their own) and books read by the club (a total of one in a couple of weeks time for now!)

I actually had sorta planned something like that via the linking of the home threads in the main post.

My plan was basically to make something like this after we finished our first book:

Would that work? It seems the simplest to me as it reduces the numbers of posts people have to go dig up on their own if it’s mostly consolidated in the top post.

edit: oh and good call out on 十角館の殺人 still being in the nomination list. I had missed that but it’s removed now.

Having everything linked in the OP like you have is very convenient, yes.
So you’re saying that instead of keeping a list of the removed nominations, there will be a link to all previous polls and people can see them there? That works too. In WK book clubs there’s a list of all removed nominations (with links to their nomination posts) listed under a details tag so that they don’t take up space. We don’t need to do it like that, of course, just using it as an example. The benefit of that is that it keeps all removed nominations in one place.

Oh, I see what you’re saying. So having links also to books that got removed due to no votes? Hm, I’ll can do that. Although later as I have to prepare for work now

Just a nice thing to have after we’ve had a few runs and the removed nominations have increased to the point that we don’t remember what has already been nominated and what hasn’t.

I became aware of the author 北村 薫 from this post. I found and read the story referenced, and I quite liked the writing. According to Wikipedia, 'Kitamura is known as a writer of mysteries, and rather than the detective and crime stories of traditional mystery, his work mainly focuses on the logical resolution of more “ordinary” puzzles and questions encountered in everyday life. He is considered a pioneer of this style of mystery in Japan, called “everyday mystery” '.

I wanted to nominate either 夜の蝉, which won the 44th Mystery Writers of Japan Award in 1991 or ニッポン硬貨の謎, which won both the 6th Honkaku Mystery Award in 2006 and the 2006 Baka-Misu Award. Read Real Japanese, the book where I read his 百物語 story, has this to say about ニッポン硬貨の謎: ‘a marvelously wacky pastiche, complete with footnotes, that purports - as its subtitle, “Ellery Queen’s Last Case” suggests - to be a translation of the unpublished final work, set in Japan, of the celebrated pseudonymous mystery author and detective, Ellery Queen. This work was also given the Bakamisu prize, which might be translated as the “Are you kidding me!? Mystery Prize,” awarded annually to mysteries with the most mind-boggling, flabbergasting, or ridiculous plots or endings.’

As you see, it sounded like fun, and a good segue to our current reading which also is a homage to, among others, Ellery Queen. But alas, no ebook available, which at least for me, is a major problem. So instead, I thought I’d nominate a relay mystery where he participates, and which is available as an ebook. I tend to not prefer relay mysteries because obviously there can’t have been much careful planning behind the plot, but on the other hand they’re fun in their own way, and a good way to get to know multiple authors at once while still reading one novel instead of a collection of short stories.

Why are you nominating this book: See post above. I wanted to nominate something by 北村 薫, but that’s the only book where he participates that’s available in digital form. A relay mystery could be good fun and a way to get to know multiple authors. Here are the authors participating:
笠井潔, 岩崎正吾, 北村薫, 若竹七海, 法月綸太郎, 法月綸太郎, 巽昌章