I have a physical media story!

A book I once wanted (…that I still haven’t read) wasn’t available as an ebook, but I found someone selling it on ebay in my country so I ordered it from them. It came looking fine, but it smelled like straight mildew.

I ended up putting it in a tight plastic bag with dryer sheets in my freezer for a month to get rid of the smell.

As for pics, I actually don’t have enough shelf space to contain all my books anymore

It’s part of why I’m trying to work through my 赤川次郎 books as I have a ton of his.

It came looking fine, but it smelled like straight mildew.

Phew; I’ve been lucky enough to get all my used books in pretty decent condition, at least. Fewer books ordered from ebay, interestingly; I haven’t managed to find anything cheaper there than if I just imported.

I should probably post a few pictures myself; my issue there is that, similar to cat, I’m at the limit of shelf space. I’m not at the point yet of piling on floors, but basically everything’s double-shelved, so I’ll have to pull things apart to get good pictures.

I really need to read my manga I’ve got piled up.

An excuse to share a picture of my bookshelf? Don’t mind if I do! 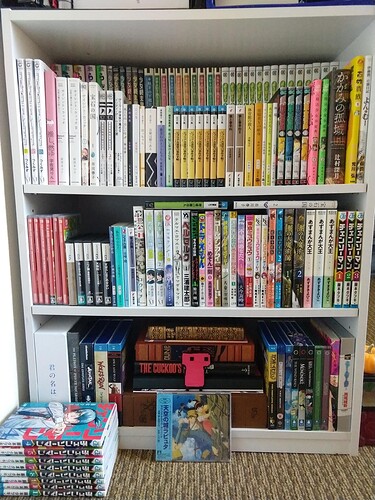 This isn’t quite my whole collection but it’s probably like 70% of the Japanese books I own. Also, I didn’t realize how much that top shelf was bowing until taking this photo… I should maybe be a little more careful with it

Imagine having so many books that your shelves can’t take it anymore… That’s definitely a goal to have!

Please do! Truthfully, I only created this thread because I started collecting some physical books this month and wondered what everyone’s collections looked like. I’ll share some pics of my small collection too. (when I get to it

I ended up putting it in a tight plastic bag with dryer sheets in my freezer for a month to get rid of the smell.

I have two more rows worth elsewhere, but this is the part of my collection I like to show off. 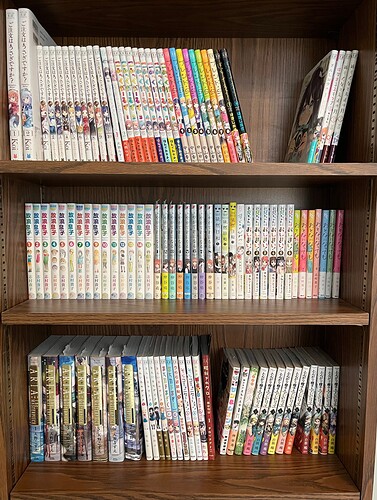 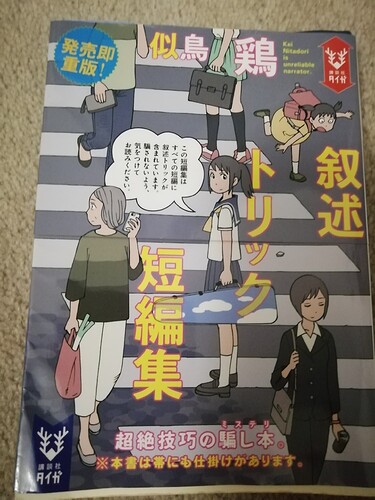 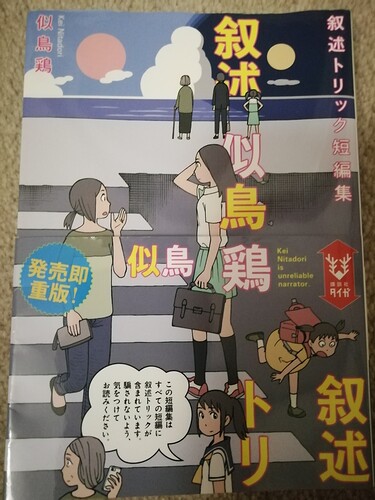 Book jackets can be so cool! I think the only one I have that looks neat is unfortunately one that I didn’t even like enough to finish, #ある朝殺人犯になっていた | L32 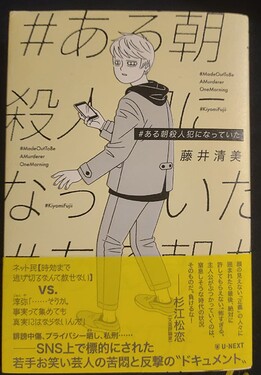 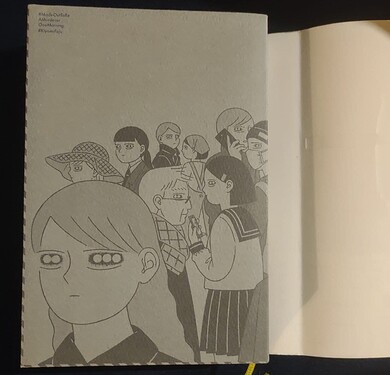 Also I took a pic of my one shelf that is largely Japanese books and not a mishmash of English, Japanese, and DVDs but it’s uh…not nearly as aesthetically pleasing as most of yours.

問題な日本語 is the formerly smelly one.

So here’s a question:

How do you organize your physical Japanese books on the shelf?

I have a fair few physical Japanese books, and organizing them has been surprisingly difficult. Normally I group my books by genre, but because of the dramatic size differences between them it’s hard to get it to look good on the shelf. The tiny little paperbacks just disappear in-between the bigger books.

I put “by author”, but the authors themselves are not organized by any particular schema besides what fits on the shelf. Within each author titles are organized by title.

There is vague organizing by size in the shelf pictured with larger books being on the ends, but if my other shelves with mixed English and JP were visible it would quickly become apparent that my organization system is ‘A book fit in an open space’. I like the chaotic look, it feels homey

I try to keep 上・下 next to each other but that’s about it.

Where’s the “all of the above” option?

My top shelf is all Manga Time Kirara (with some overflow on shelf three), so by publisher.

My second shelf is all LGBT themed (with some overflow on a shelf not in my picture), so by genre/topic.

My third shelf (and not pictured shelves) is kind of miscellaneous.

But I also definitely try to organize them by size as much as possible.

I finally put my books back on my shelf so I can share, yay! 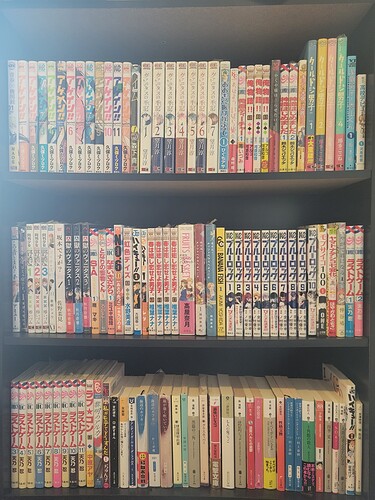 but yeah full bookshelf complete! This is mostly manga; there are some novels in the bottom right though. I still have quite a lot of single volumes from the early days when I had no idea what I wanted to read, but I’m starting to get more of a feel for things haha. You can also tell how many of them I haven’t even touched from the fact that they’re still wrapped in plastic

Book jackets can be so cool!

Yeeesss I love book jackets!! That’s honestly a big part of the reason I love getting physical versions, like yes I also just like reading physical books better but there’s so much cool design on a lot of books (especially manga) that you just don’t get digitally, you know?

It’s worked out so far!

My OCD would want me to sort by 五十音順 rather than English alphabetical order, but that sounds awful.

I don’t have 五十音順 memorized well enough to allow me to do it without thinking.

Regarding book jackets / covers, the manga 私の百合はお仕事です has some interesting ones. It takes place in a fake yuri cafe, except the MC is actually hated by the girl acting as her yuri partner. The two versions of the cover show that dynamic. (I didn’t actually enjoy the series, so only have two volumes to show off.)

The inner covers for ひとりぼっちの〇〇生活 are also cool. They show the main character’s circle of friends growing over the volumes.

ご注文はうさぎですか is a bit weird, in that the inner cover is used to show the table of contents. Not particularly convenient to be honest.

Nothing else from my collection has a noteworthy cover, as far as I can find from a quick scan.

My OCD would want me to sort by 五十音順 rather than English alphabetical order, but that sounds awful.

You could always sort them in いろは order!
…wait, that actaully sounds kind of fun…

Book jackets can be so cool!

And I’m also a huge fan of cool book jackets! I love when there’s a secret second cover underneath with fun stuff. A couple of the 【マンガ】本好きの下剋上 (series) | L25 manga covers have a すごろく board based on the story (which stretches across multiple books), and かぐや様は告らせたい 3 ~天才たちの恋愛頭脳戦~ | L29 has several self-referential cover jokes, such as volume 3 with a manga that features the previous volumes’ cover illustrations as characters.