Since Natively’s so reading focus, and this is starting tomorrow I was curious if anyone was planning on joining the Tadoku reading competition.

It’s a friendly reading competition where you measure the points you submit yourself across various reading media (manga, novels, VNs, etc) and is meant to encourage building up a habit of reading regularly in your second language. For me this thing has been a godsend. Something about the accountability of reporting in every day to say what I read in a place everyone can see, combined with the light competitive banter with the people I know in the competition, and the fact that it gives me something to measure my progress against over a period of months since it isn’t constantly running really does something to my brain that motivates the heck out of me. This kind of setup isn’t for everyone, but I really love looking back at my progress over the competitions this year and seeing how far I’ve come since January, so maybe there are others around that are easily motivated by seeing numbers go up like me

I’d love to hear if anyone else is joining and what their goals/plans are if they are!

I’ve never heard of this before, but I’ll try anything once! Just made an account and joined this round

I have been keeping track of my reading for the past couple of years, using tools like bookmeter and natively (and a thread on the WK forum, although I’m not using it much at the moment). So I don’t feel like adding another tracking thing to the list

Plus, the way I like to read stuff is a huge disadvantage in that kind of competition: I really like to subvocalize (which slows down reading) and I also like to put down the book I am reading to think about what is going to happen next (usually pacing around the room while I do this). I’m only doing the latter when I am enjoying the book, though, so I could increase my speed by only picking up stuff I don’t like (but that sounds like self-harm, so I won’t

I agree that goals and seeing numbers go up is great, though!
(I’m going to put mine behind a drop down because no one cares, I guess)

I joined last competition until half way through. I found a few things a mood killer:

Also what Naphthalene said, adding it to another (4th for me) place daily for the return I was getting, it became annoying. Maybe someday we can have reading competitions within natively (cc @brandon)

Oh that’s fancy, is that a custom bot?

I have this in one discord server with a friend, it generates a report of what I log daily at the end of the day. 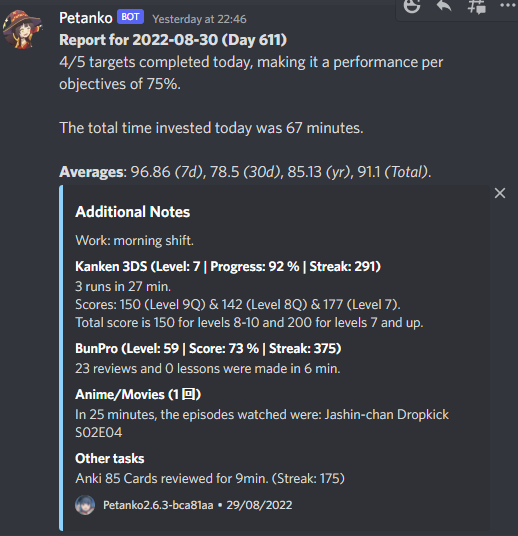 is that a custom bot?

I have no idea, but I am pretty sure that at least the logging must be custom…

Your bot looks very neat, too.

Totally agree with your second one there, always bugged me when people don’t make any comment about what they read.

And yeah both of these bots look really interesting

Speaking of bots, I wonder if I could just write a user script for Natively that would automatically log it to the tadoku challenge too…

Ah, but looking at their explanations, I see that

Tadoku is supposed to motivate people to read more, and in order to keep things fair updates should be somewhat regular. Participants who keep posting irregular (large) updates will be removed from the contest

I’m on pace for books, but lagging behind in terms of “non-LN” books. I can probably reverse that easily by focusing on the Red Data Girl series (6 volumes).

By the way, I’ve actually found Red Data Girl a little more challenging than expected. (I find it harder than 本好き and (so far) 狼と香辛料.) Not that I expect you to be challenged by it though.

For manga, the challenge so far has been to find series that I actually like

Have you tried Chihayafuru? It just finished publication, and I think in terms of characters and content you’d probably enjoy it.

On the specific topic of the thread, I won’t join as I prefer to not set goals. I prefer to simply read whatever I want, whenever I want. I also don’t do tadoku well since I subvocalize and look up a lot of words.

I’ve seen this competition before and haven’t wanted to join because, like others, I’m already tracking my reading in several other places. But I’ll give it a try this round! I was really good about reading constantly in June and July, but in August I barely read at all. So maybe this will help me get back on track with all my unfinished books…

I’m already tracking my reading in several other places

Yeah, totally get this one. One day I finished a book and after going to update Tadoku, AniList, Bookmeter, Natively, and Goodreads I questioned a bit what the point of it all was lol

But then, the problem is that none of these captures all of my reading since none of them have every reading medium so I never decide which to drop. (Tadoku does I guess, but I never thought of it much as a tracker in itself since it’s not up all the time).

I really like to subvocalize (which slows down reading)

Its interesting to know I’m not alone in this

I like to read out-loud alot of the time and try to adjust my voice depending on the character and their current emotions.

I don’t think I click well with any sort of competition and learning.

I know that at somepoint during the reading it would start to feel like a chore for me and I’d get put off.

Im trying to cultivate reading in Japanese just for fun…. Like when you’re a kid and spend the day reading books, engrossed in another world.

I’ve started reading physical books recently and thats been a massive boost, being able to chill and not worry about lookups is delightful

For manga, the challenge so far has been to find series that I actually like

Oh, just thought of something. Have you tried reading 乙嫁語り (series) | L23? Just based on the setting it seems like something you might like. (I haven’t tried it myself yet.)