What custom library tags do you use?

So this was a feature I’d actually forgotten about until I saw @bbo mention it in their 百合 thread, and now I’m curious what tags everyone’s set up!

This actually made me go take a peek at my tags.

Here are my tags!

I’ve been thinking of adding genre tags too, at least until genres are (hopefully someday) added to the site

will continue at higher level

Now that’s a good idea for a tag; I know I’ve got a few books lying around that are still “someday” books.

I just have the “reread” tag so far, to keep track of things I have read twice until that feature is implemented in Natively

Oh, that’s nice!
I’m probably going to steal that organization (once I have the time)

一般読者向け (if someone knows a better term for this, please let me know

basically books not aimed at a specific subsection of men, i.e. that have more to offer than big… eyes.

the description makes me giggle, but since I’m not entirely sure on which demographic/genre you’re talking about specifically, I can’t suggest something different

@biblio now i’m even more confused lol. I went to go snoop and when I clicked on your 一般読者向け library, I see Yotsuba and Chi’s sweet Home

alas, I cannot find any books that have more to offer than big…eyes

oh, so you just meant like slice of life/no pantyshots/R18 scenes? it’s my first time seeing the word 一般読者向け lmao im so embarassed, i thought you were talking about yaoi smut and i was like “i dont really know a way to say that”

I went a bit overboard and added a billion possible tags… then got tired adding them on every book and instead just focused on the first book of each series… and I got tired of that too.
Maybe I’ll just wait for tags to be implemented and use those instead.

Maybe I’ll just wait for tags to be implemented and use those instead.

Oh goodness you did! Yes, to be clear these are intented to be more custom lists, rather than tags… not that there’s a big difference there.

Wait how do you add custom tags? 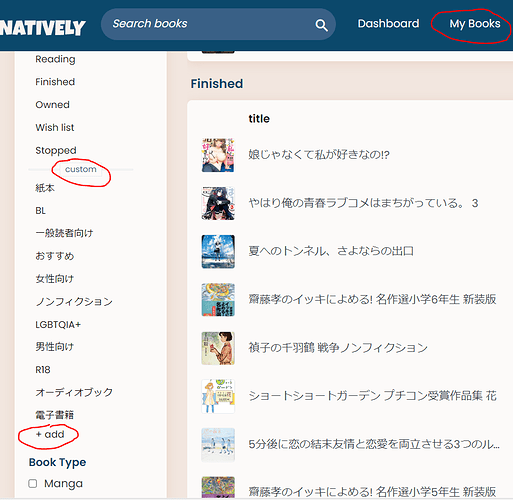 I use the same system as I do on other websites. I have one tag for ‘Medium Priority’, one for ‘High Priority’, and one for ‘Up Next’.

The ‘Up Next’ tag is where everything goes that I’m planning to read after what I’m currently reading. On Goodreads, my ‘Up Next’ list currently contains 13 books, so I can plan quite far ahead, but the list is by no means set in stone. It’s more like a workbench where I’m ordering stuff in the order I’d like to read them (that’s what I usually do, anyway, and I would do that here on Natively too if it was possible with custom ordering * cough*@brandon*cough *), and it’s nice as a reference.

‘High Priority’ is where I look for candidates for my ‘Up Next’ list, which is very useful when you have as many books on your to read list as I do. ‘Medium Priority’ is where stuff goes that I’d quite like to read, but that I feel aren’t quite ripe for reading yet and so would like to wait a little with (e.g. until my Japanese is better, or the premise doesn’t seem as interesting as many of the titles in ‘High Priority’).

All untagged items essentially constitute an informal ‘Low Priority’ list, where everything goes that I would like to read at some point, maybe.

I do have tags related to genres and types on Goodreads, but I haven’t actually used them yet, so I may or may not implement something similar for Japanese books in the future.

I was checking the things on your “up next” list, and

The story follows an early middle-aged office worker who suddenly transforms into a magical girl while trying to protect a kid from a monster.

That sounds like a really fun story!
I’m adding that to my wishlist as well.

Yeah, I got interested in it thanks to Athakaspen’s review as well.

Just need to figure out if reading manga digitally works okay, or if I’ll try and find it physically instead.

@Arctagon @Naphthalene i’ve read some of it in English and I’ve enjoyed it so far! I didn’t even know it was on Natively, so I’m adding it to my library as well lol