叙述トリック短編集 is a collection of 6 short mystery stories, all of which use narrative tricks to confuse the reader. Supposedly they’re still difficult to solve even if you’re looking out for the trick. I thought it might be fun to read as part of an Advent Calendar: Read one story over 4 days, and try to work out the mysteries in the process. The plan is for the book to be completed by December 24. Apparently the あとがき is important to read (I suppose it explains the tricks used in the stories), but I’m okay with leaving it for Christmas day or later.

I’ll post my reading updates in this thread each day after I’m done with the day’s reading. Of course I’ll use spoilers for any notes or speculation.

I realize this is very much last minute, but if anyone would like to join me, with this book or another reading advent, you’re very welcome! The more the merrier.

Me eyeing this “bookclub”

My TBR eyeing me

Read the first chapter of the first story. There are four chapters of about equal length in this one, so it works out well. I may need to adjust for later stories. I’m at 5%, or page 22 according to Kindle.

And what a festive mystery it is! It involves… a toilet. Not spoilers but in case you prefer not knowing anything: We are at an office where not much work is being done. A toilet in the ladies was blocked and had overflowed, but when it is checked later it’s all fixed and the floor is clean. Yet no one admits to having fixed it.

I found it confusing at first, but it may have been because I had just read a story from a different book plus the intro, so my head wasn’t at its clearest. I reread quickly just to make sure I had all the persons down correctly, and it felt much easier the second time. They’re all rather quirky though, and it’s possible I’m missing some references in the dialog. Hopefully whatever I’m missing isn’t important (ha).

All in all, a good start. I was worried that it would be laid out like a puzzle, dry facts only, but it’s funny and feels complex even though the case seems to be a very simple one. Looking forward to tomorrow.

Since I have kindle unlimited there really is no excuse not to join you in this endeavor. However, since I have no self control, I read all of the first story in one go. I reckon if I read one every four days it’ll be advent-ish enough for me.

I’ll keep it short: I was not able to guess the trick, though one hint of it did strike me as … Interesting and potentially relevant. So I’d say I caught half a hint but wasn’t able to follow through!

and now behind… but I’ll catch up. 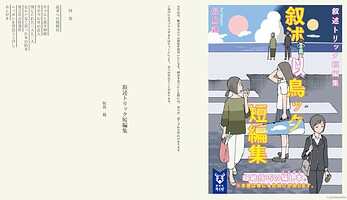 since I have no self control

Yay, welcome, both of you! And no worries, if someone has no self control when it comes to reading, that has to be me. With three active bookclubs and one more coming up, personal reading on the side, and now this advent, I’m in way over my head. But I just can’t resist.

This toilet and food talk is priceless… And is there no normal person in that company?
Right when I was forming my suspicions, a new strange person joins our group. And it’s apparently not who I’d been expecting.

I’m dying to speculate, but with one of you having finished the story and one of you not having started, I’d better not. Plus, even idle discussion may inadvertently highlight an important detail and spoil the fun.

I just finished the preface. It makes me quite excited for the book.

Ok, I am pleasantly surprised. I was expecting murder and corpses and gruesomeness… but instead I get a clean toilet.

I wonder if the sweets have any importance?

I had to look up what 甘納豆 is. (What I imagined it to be, was vomit-inducing.

Having read this recently, I’ll be lurking on this thread, enjoying the speculation

I was curious and finished the story. I am so confused.

Some random thoughts for the amusement of all of you who have already finished:

The story started with how we name certain things, and how some names stick while others don’t. The motif continued with the chocolates and 六反田 -I think- saying the name wrong, then with 羽海ちゃん using a different word for the plunger. Then the strangest and most suspicious detective ever asks the 課長 why (s)he (we don’t know, do we?) keeps using the word 課員. I have no idea why this would be a strange choice as a word to be honest. Is there some nuance I’m missing?
Then there’s all this food that keeps being mentioned. Is that for humorous effect, I wonder? Or is it somehow important?
Other than that, the order the people are reported to have entered the toilet is different in the two instances it’s mentioned, although it wasn’t entirely clear the order was specified the first time…
What does it all mean? Am I even focusing on the right clues? Probably not. I’ll think some more about it, then I’ll find out tomorrow.
Oh, by the way, my first suspicion was that the toilet was never blocked, and that Miss 六反田 just wanted an excuse to see the plumber, or just some amusing diversion to pass the time.

I was curious and finished the story. I am so confused.

You are confused after finishing the story? This doesn’t bode well…

You are confused after finishing the story? This doesn’t bode well…

It just takes a weird turn at the end. And I don’t know what the point is. Like the end has nothing to do with the story in a way. For a second I thought, I accidentally skipped into another story.

Your thoughts are interesting. Personally, I did not come to the conclusion the people in the story come to, but we are missing information that isn’t revealed until the “trick” is revealed. or maybe I missed it. But then again, according to the preface, that’s kinda the point, right?

Okay, so I slept on it, and I think I may have worked out the trick.

While it’s heavily implied that 常務 is male (necktie, suit, the position itself -this is Japan after all), and even the name 男成 at least visually suggesting a man, it’s never explicitly stated. Even when 常務 enters the ladies toilet, 若井 is invited along (the only one explicitly male), and his hesitation for going into the ladies is easily interpreted as being for both of them, when it’s not necessarily so. The two people standing outside the toilets are asked about who entered the toilets twice, both times directly by 常務, and both times they hesitate in their answers. Both times they look at each other for confirmation, and the second time 課長 nervously looks at 常務, supposedly to get the approval of the superior person in the room. If someone you clearly saw going into the toilet asks you who went in, and never hints at being one of those people, it’s easy to assume that you’re being asked to hide the fact, especially if that person is in a superior position in the company. Thirdly, this explains why 課員 doesn’t apply. So I’m pretty sure it’s been 常務, all along.

Now let’s read and see how wrong I am.

So I did catch one trick, but there were so many of them. I was obvious that 羽美ちゃん was much younger than the others, but how were we to know how much younger? And it’s true that the 課長 kept saying that no 課員 had enough agility to climb out the window, while 羽美ちゃん seemed nimble enough, but picturing a company of seniors with a school student just passing the time there was a bit of a stretch. As for 淵さん not speaking, I just thought she just didn’t care about all the fake toilet drama. Other than that, I don’t know if it was because I got tired by the explanations about the company itself at the end, but I kind of missed that the culprit had been revealed and thought it was all just working theories. So 淵さん’s dentures blocked the toilet, then 羽美ちゃん did all this burglary-like stuff in seconds (they all got out of the toilet very quickly, right?) out of the kindness of her heart? A tiny bit absurd but okay.

The next story seems to be longer, and the third story a lot shorter, so I need to see how to divide the time for the rest of the reading. I’ll be back.

Edit: Okay, so I think I’ll split the next story into 6 days, doing two chapters a day. Then 2 days for the smaller next one, and 4 for the remaining ones. The last one is longer again, but it being closer to the holidays, it’s possible I may have more free time. Or not.

Now let’s read and see how wrong I am.

Pretty wrong, but it might have implications for future stories? If I remember the preface correctly, the stories share people. (or did I misread that?) But if that is the case, maybe the gender being ambiguous plays a role in one of the future stories…

Pretty wrong, but it might have implications for future stories?

While I was wrong that 常務 was the culprit, she was in fact a woman. So I guess I fell for the trick of feeling proud of myself for seeing through one trick, while completely missing another.

The foreword does mention one character shows up in every story!

I read the first two chapters of the second story as planned. I must say, I did not expect to read Greek in a Japanese book!

So far it looks more like a love story than a mystery. Many of the things 詩織 said were relatable, while others sounded a little extreme. I’m having a very strong suspicion about her, but I fear it’s just another misdirection. Let’s see how it continues.

(If I don’t forget again…